A Wedding in French and English 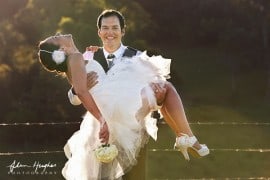 Congratulations to Fanny & Tommi married in both French and English at Flaxton Gardens in brilliant sunshine.

Fanny contacted me to request a marriage ceremony on the Sunshine Coast Hinterland Range, that both her family and Tommi’s family could understand.  In fact they wanted the entire ceremony in both languages!  Now there’s a challenge I love.

I always offer to create bespoke ceremonies to suit each couple, so that part was not difficult.  For Fanny and Tommi, I simply had to translate the custom ceremony into French as well.  Now whilst I converse in passable French, I will admit to seeking guidance from my dear French friends, to ensure the grammar was all correct.

The outcome was a delightful ceremony ….read twice, as French & English took turn about during the ceremony!  On top of the usual wedding day nerves, both bride and groom made their promises to each other, first in their love’s language, then in their own.  It is not an easy task when one of those languages is not your mother tongue.  The guests were particularly encouraging, and warmly congratulated them for their efforts.  It made for amusing times as half the guests would laugh then moments later the other half got the joke!  As long as everyone understood, in the long run.

Fanny surprised us all arriving in a retro red Kombi with her two beautiful sisters and her charming father, all of whom had travelled from France to be here for Fanny’s day.  She walked down the aisle on the arm of her Dad, under brilliant blue skies to her waiting groom, Tommi.  Their ceremony was not complicated; simple and chic, elegant yet relaxed, with some laughs and I noticed some tears of emotion too.

Tommi and Fanny I wish you well in your future lives together and congratulate on including both your mother tongues in your wedding ceremony.  Thank you for the opportunity to use your poetic and musical sounding language.

One of the specialities I can offer couples, is a ceremony with other languages.  Some of the requests I have fulfilled are a French poem,  a prayer in Afrikaans, and a blessing in Sanskrit, to name a few.  My background as a musician means I have a trained ear for catching sounds.  So even when I do not speak the language, I will learn something in your tongue for you.  I’ll try anything, and with a bit of practice I have delivered so far.

However two languages are my specialty.  I speak fluent Indonesian, having lived there for years in my youth, and Fanny says my French was perfect. Well at least her family who flew out from France for the wedding day could understand the whole ceremony, and not feel at all left out.

It simply helps to know that a wedding in Australia can encompass whatever tradition or culture you wish to include.  Languages are no barrier, and I welcome customs from other traditions.

“Thanks Kari for everything you have done.  We had a great day and the ceremony was amazing; your french was perfect 😉 Thanks again” Fanny