A truckload of red wheel barrows 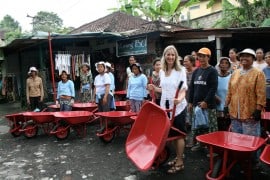 What does a truckload of wheel-barrows have to do with ceremony?  Intrigued? read on…. 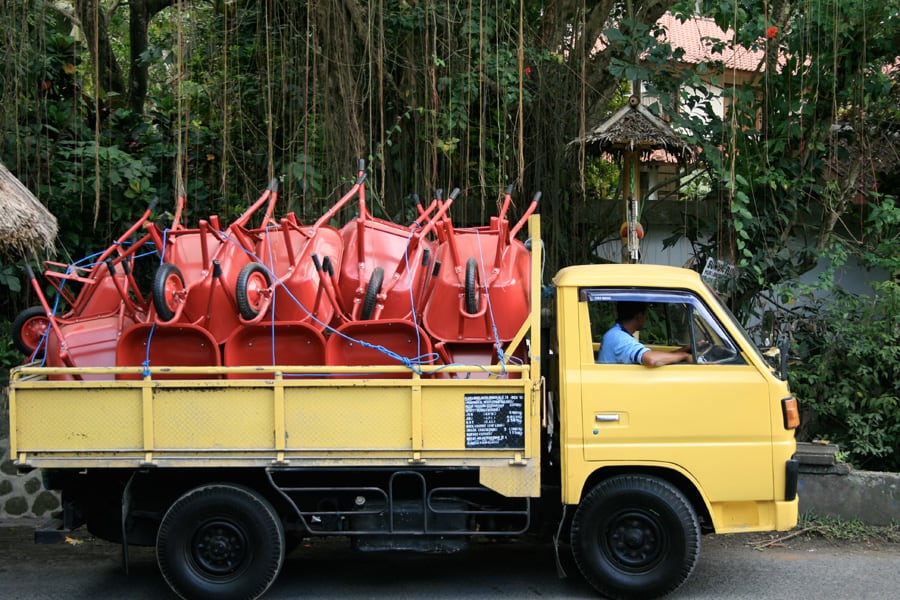 Ritual and ceremony find a place in many different contexts.

Marriage celebrant Kari recently had the opportunity to be a part of an unusual ritual and an extraordinary project in Bali, Indonesia.

Instigator of the endeavour, Kay Parslow had this to say,

”Project 50 started as a simple idea to make the working lives of a group of women from the Balinese village of Pennestanan, a little easier, but also to foster friendship and to make connections with another culture.”

In every respect Kay has achieved her goals, with the help of a group of Australians willing to be a part of Project 50.

But to begin at the beginning…. 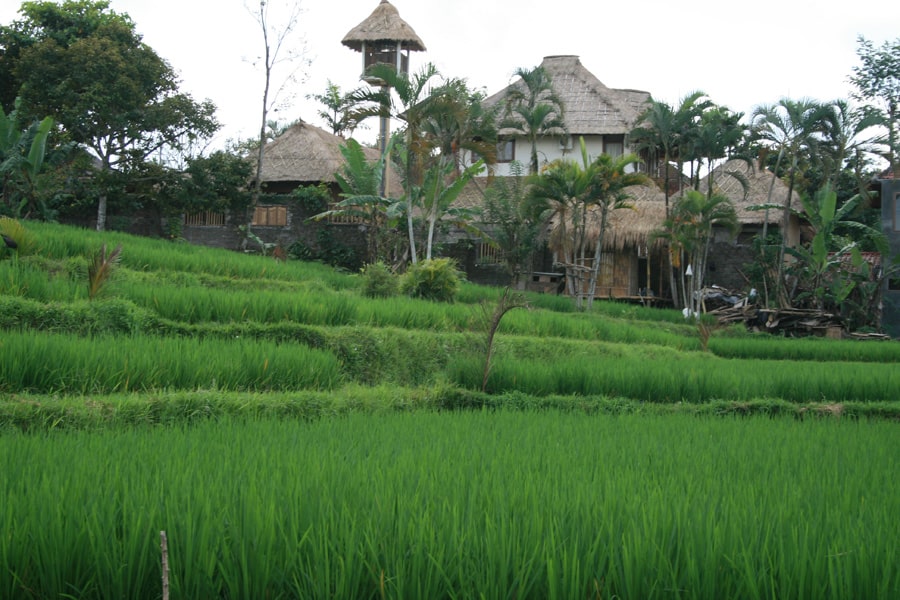 Two years ago whilst basking in her thatched cottage overlooking some Balinese rice fields, it dawned on Kay that she had been watching a line of women carrying tin dishes of bricks, rocks and gravel on their heads; to and fro along a narrow concrete path.  These women carry building materials from the roadside dump point, along narrow paths, to the actual building site in the rice fields, many 100’s of meters away.  They do this all day, every day, as long as there is work.

In an endeavour to give back to the community she was staying with, Kay bought some new tin dishes for the women.  It soon transpired that there were many more women than one woman could help.

On her return to Australia she hatched a plan to connect a group of working women in Australia with a group of working women in Bali.  She garnered support from 50 Australians, each one donating a small sum of money to a pool of funds.  These funds were initially used to buy new tin dishes, new hats, shoes, shirts and cement to repair the bumpy path, but in the back of her mind, Kay was thinking wheel barrows.  It may be OK to carry vegies from the market on one’s head as per centuries of tradition, but rocks and bricks were ‘breaking the camels’ backs’.

Recently I had the opportunity to take Project 50 funds to Bali with husband Stephen and father Peter.  As a donor, I was keen to make sure that our assistance did not have any negative impacts on the local community.  This recent experience taught me that it is not as easy as it sounds to donate equipment to a community.  The gift could be fraught with concerns of creating imbalance, or false need, or upsetting local systems.

To overcome these fears and potential problems it was important to talk,….lots of talk, and give opportunity for the women themselves to speak.  Having fluency in the Indonesian language as one of my skills was crucial to this aspect of the project.

My first task was to have a round table dicussion with the women on their working lives and how they could benefit from extra assistance.  The conversation began gently; I clarified, that the donors were working women of Australia who wished to help working women of Bali.  They too had jobs, families and husbands.  Perhaps I rolled my eyes at this point, but it seemed to break the ice, and much laughter ensued.  Suddenly the stories were flowing.  Children, husbands, families; we realised we had so much in common, and the cultural barriers dropped.  It was now a conversation amongst women of the world. 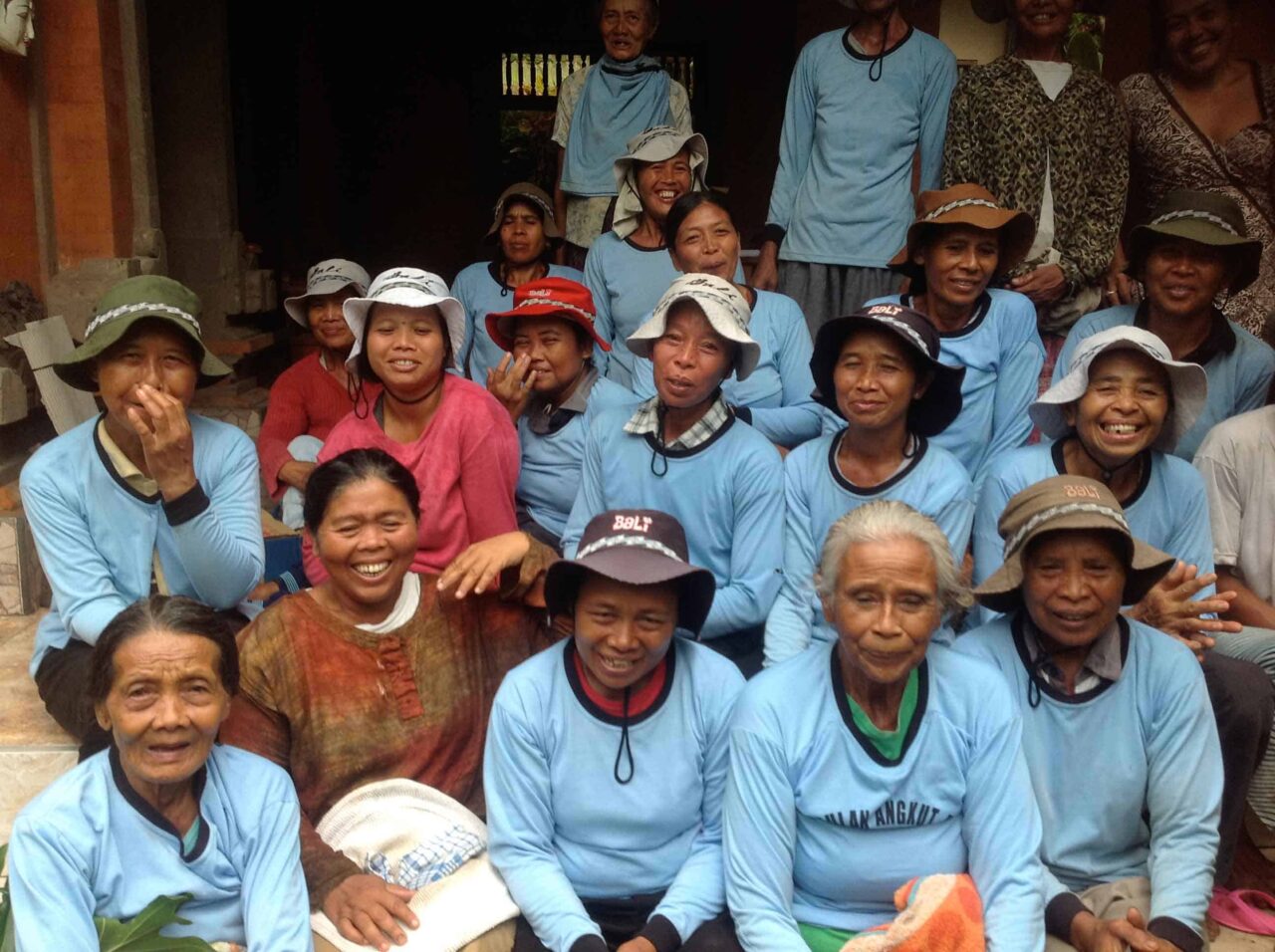 It transpired that they had already started using wheel-barrows; borrowed and begged from building sites.  Yes they would love to own their own working tools.  The message was clear.

Funds were used to buy 28 wheel-barrows and pairs of rubberised gloves.  Thanks to last minute donors, my parents , for pitching just as our funds were running out, in to buy the final barrow to complete the groups needs. 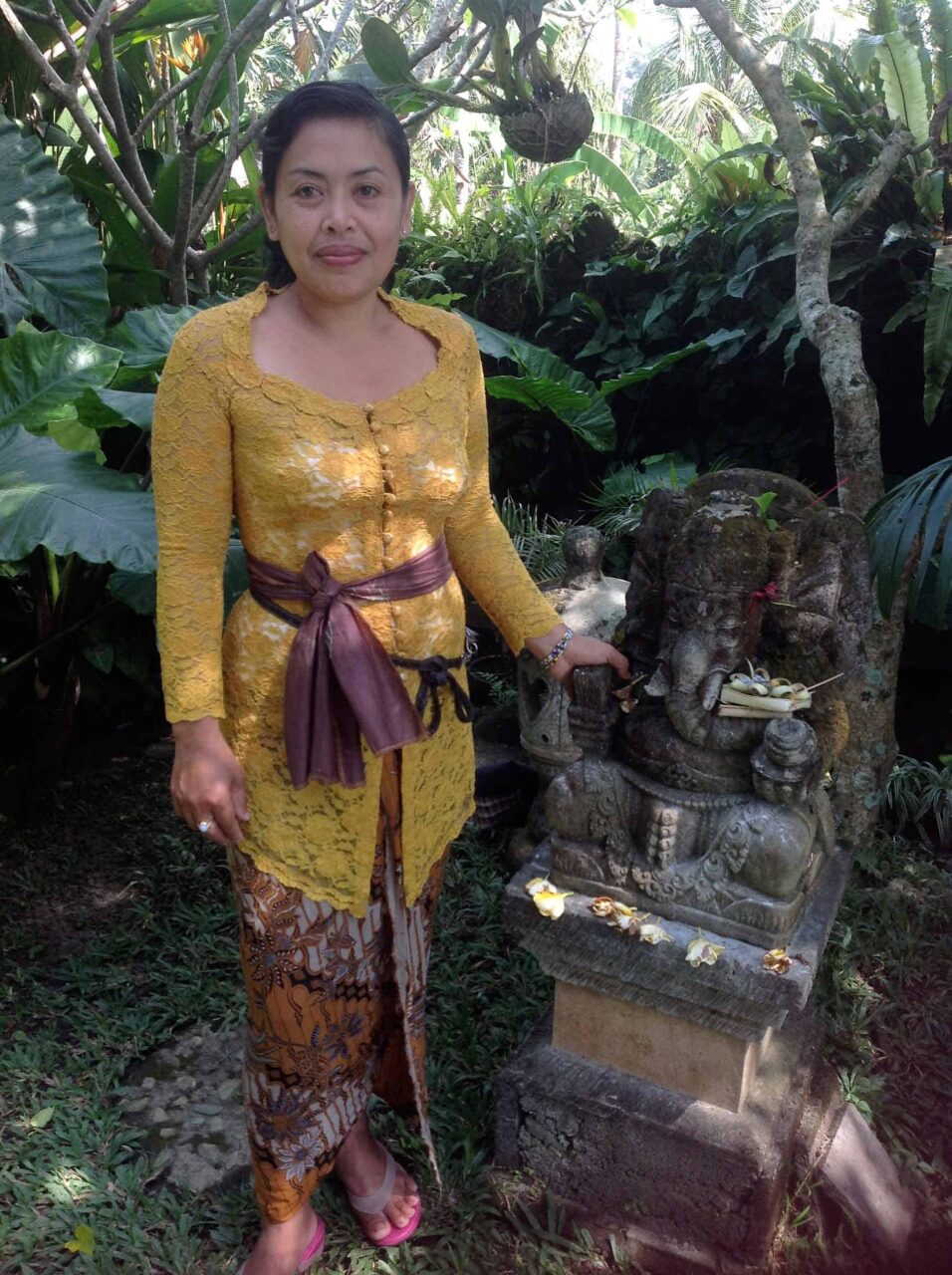 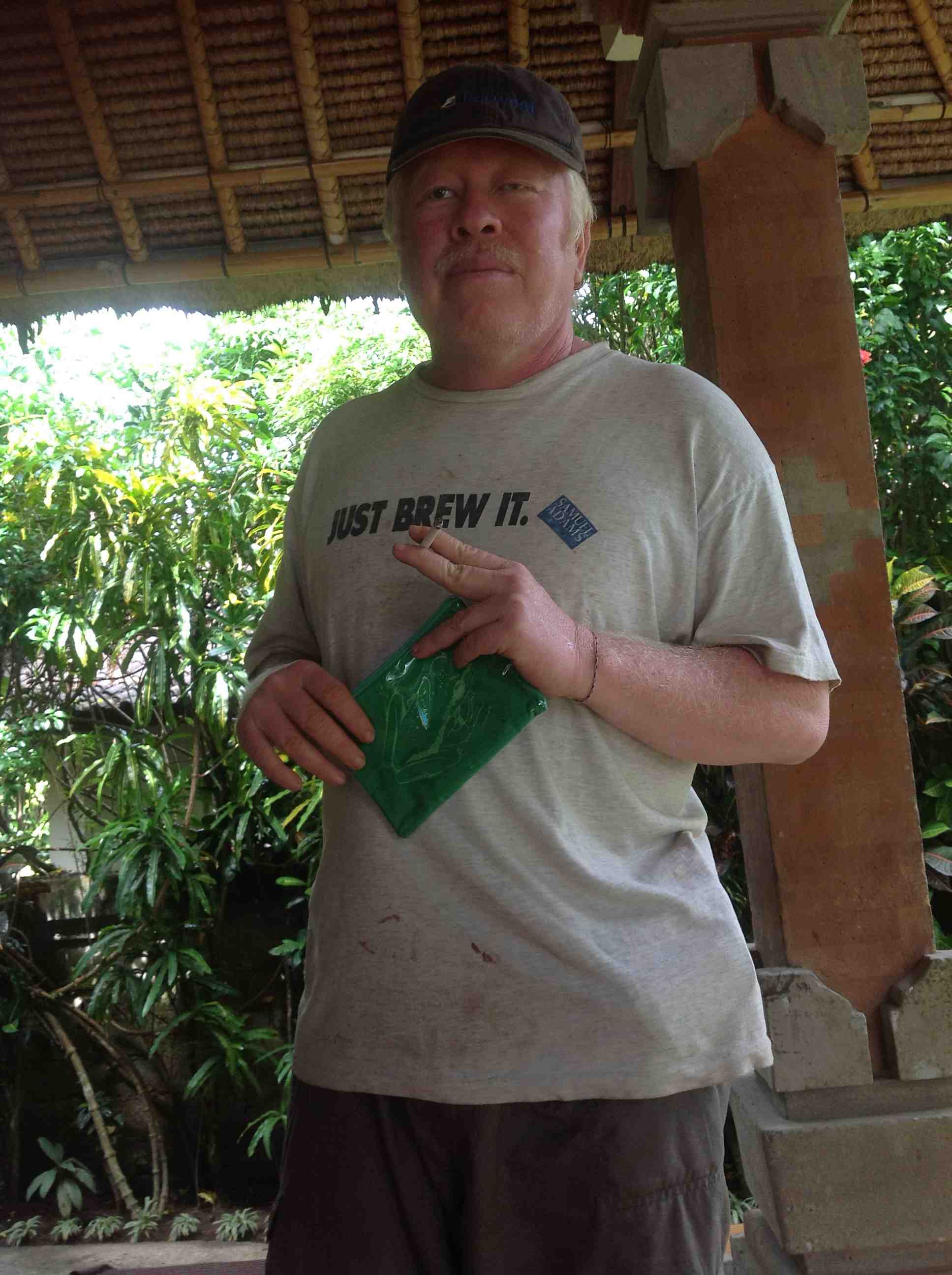 The celebrant in me wondered if ritual was appropriate at the hand over moment.  Checking this idea with my wise friends and local facilitators of Project 50, brother and sister team Made Yus and Wayan Murda, it was decided to be a great idea.  These two Balinese have been generous and willing locals in facilitating the Project 50 goals.  We are very grateful for their wisdom, guidance and warm friendship.

The truck arrived laden with red barrows, and the women gathered.  With Dad on documentation duty and Made Yus and Wayan Murda standing by we began our humble but poignant ceremony.   A blessing was created, encompassing the donors and the recipients; a kind of prayer from Australian working women to Balinese working women.

Using water from the rice fields, in a locally made ceramic pot, adorned by the face of Barong who keeps the good spirits around and the bad spirits at bay, scented with drops of lavendar oil, each woman and barrow was blessed, one by one; water poured over their hands and barrows.  We wiped our faces and chests with the moisture, bringing the blessing deep into our hearts, and washing ourselves with intent.  It is very Balinese, but alo connects with rituals held the world over.  It was a solemn moment ripe with promise. It was a deeply felt moment full of friendship.

I gave this belssing to the women, their families, their barrows and the families who would benefit from their work.  In a country where ritual is part of everyday life, this moment was appreciated and respected.  Each woman felt she had received more than simply a tool for work.  She felt the energy of Project 50, and the dream of Kay, who commented, “this is where I think ceremony plays such an integral part….in making heartfelt connections and formalising relationships…giving context to form and garnering respect between parties. I love that the Project ended with a ceremony….. completed the circle making strong connections with another culture”. 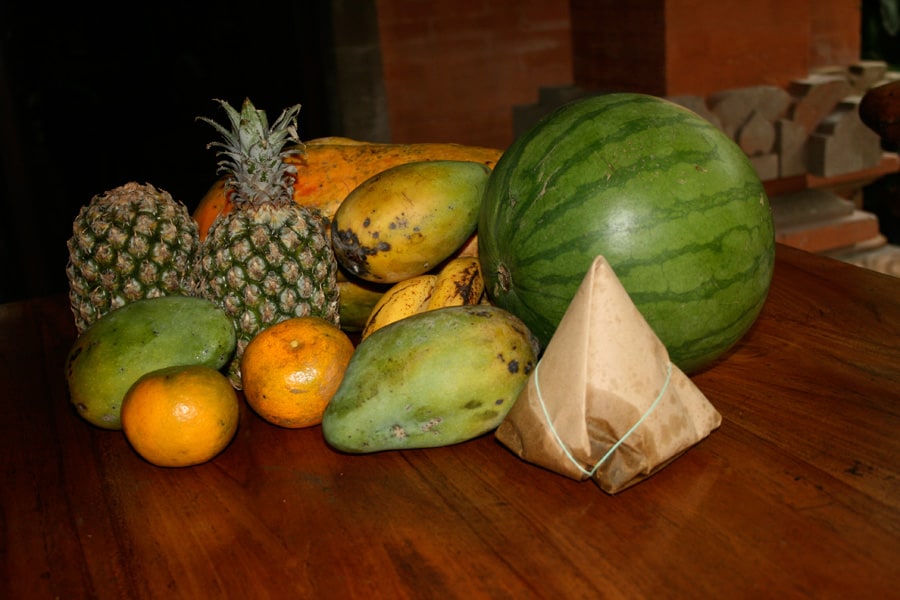 For the following week, myself, my father and husband had a string of friendly greetings each time we walked the paths.  “Halo, halo”.

From each and every woman, we received 100’s of genuine, heartwarming and grateful thanks.  No gift that I have ever given has been more appreciated.

We carry these messages to the donors.

On our final day, we came home to find a pile of fruit on our doorstep, a return gift from the women of Project 50.  This project had ceased to be about the comparatively wealthy giving to the poor, but now an exchange, of friendship.  I felt the Project had come full circle.

As Kay says, “The women have benefited on a material level with new hats, shoes, shirts, cement to repair some of their paths, aluminium tins and the recently purchased wheelbarrows. There is a hope that their lives, as well as ours, have been enriched in other ways by the experience.

Buying wheelbarrows was the first idea that came to mind so in a sense it feels like the Project has come to completion. It was impossible to imagine that two years on our actions have actually resulted in the women keeping their jobs, as now having a wheelbarrow, is a prerequisite to employment.”

I feel many lives have been enriched, certainly mine, by a very humbling experience.  I return home full of appreciation for what those women gave to me.  It was a teary farewell, as they urged us to come back soon. 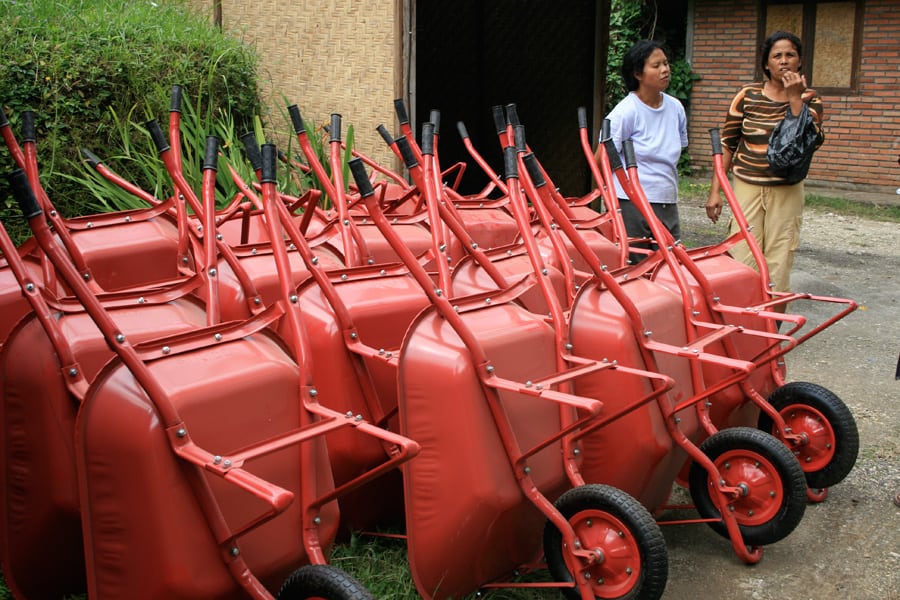 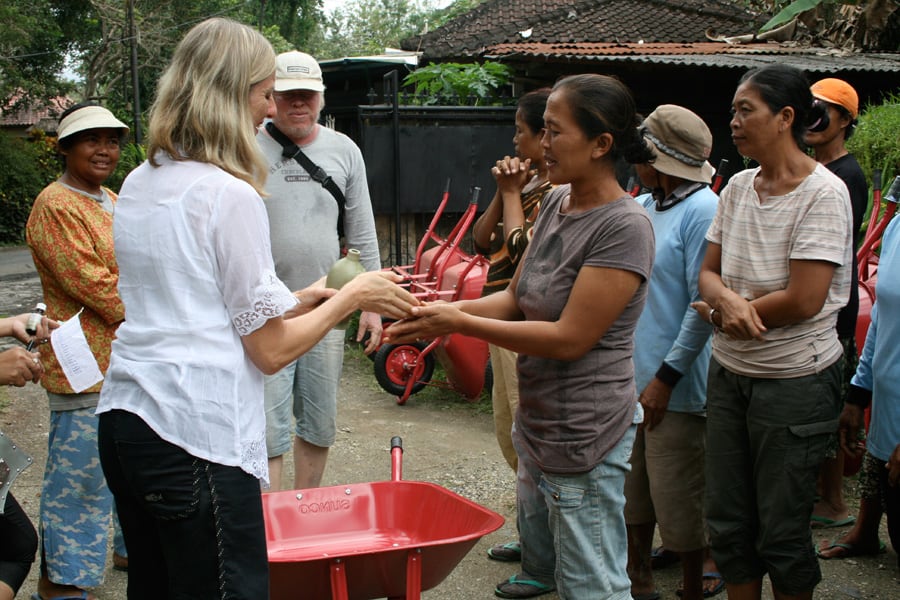 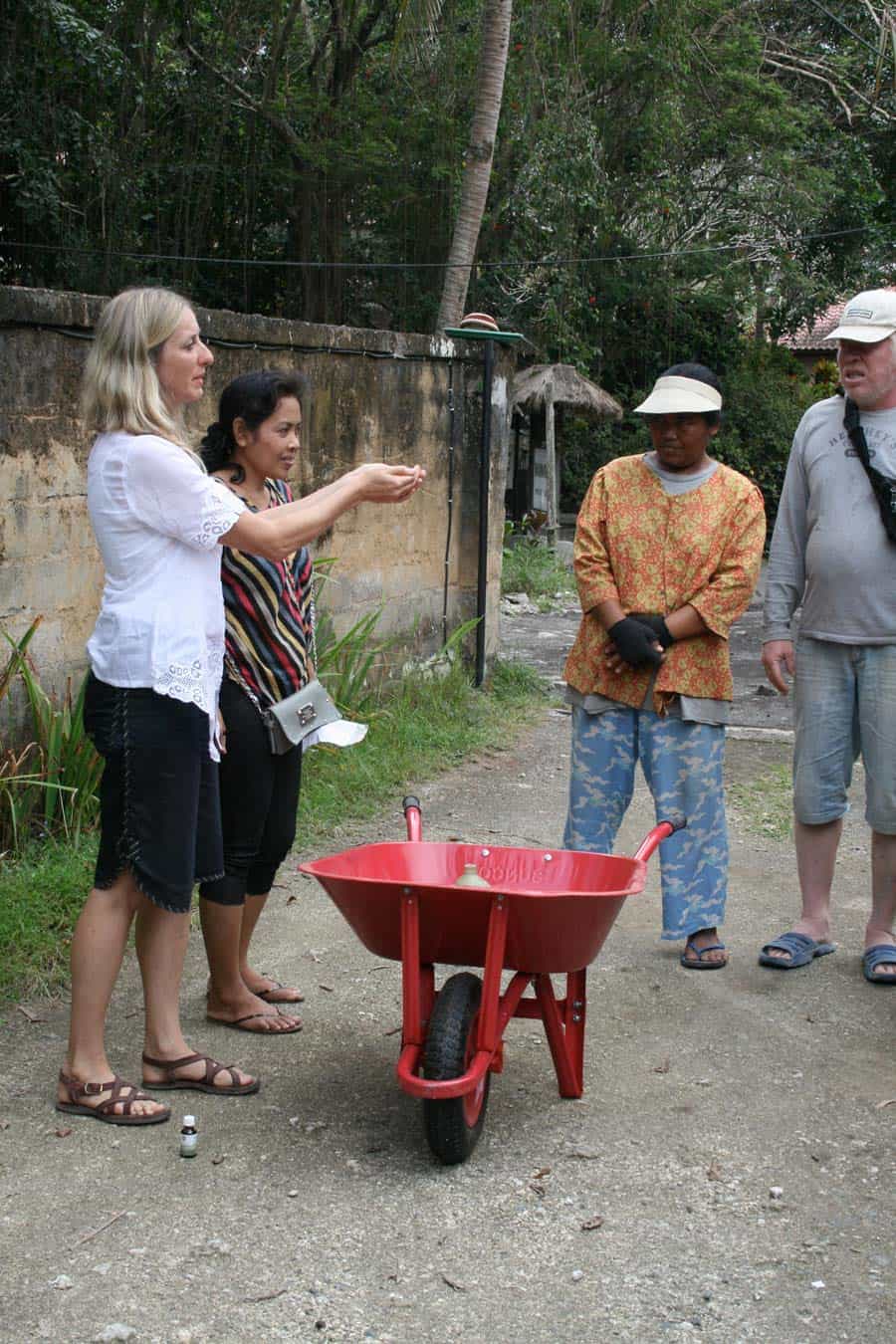 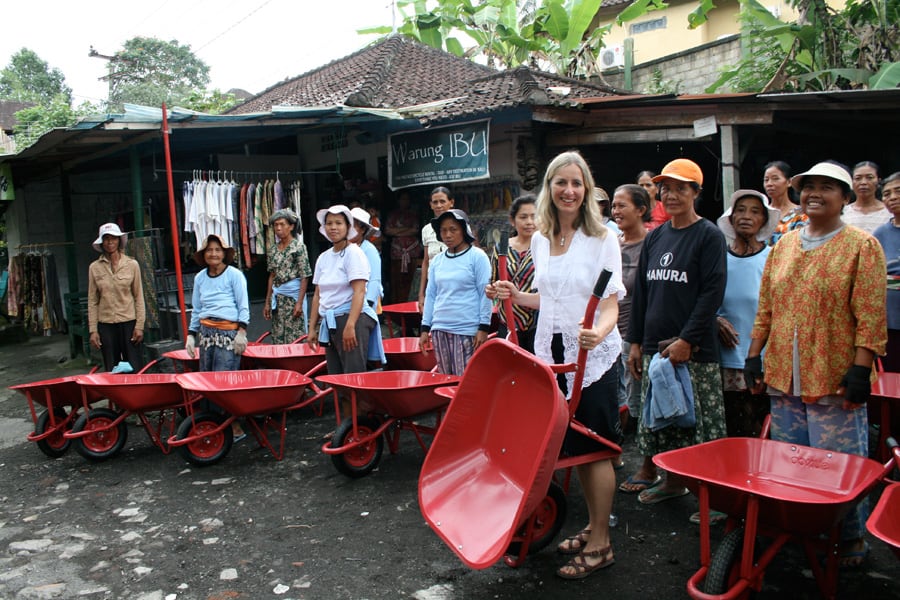 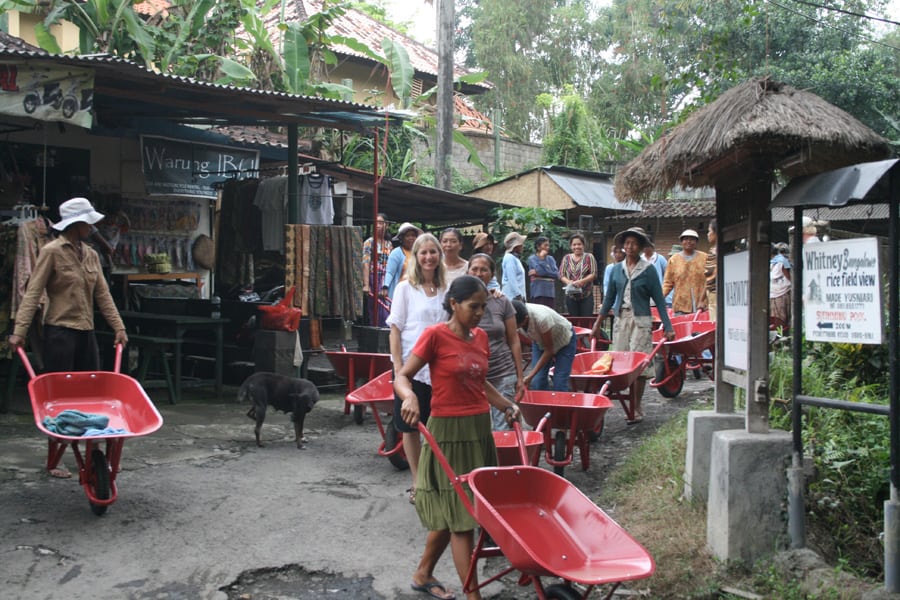 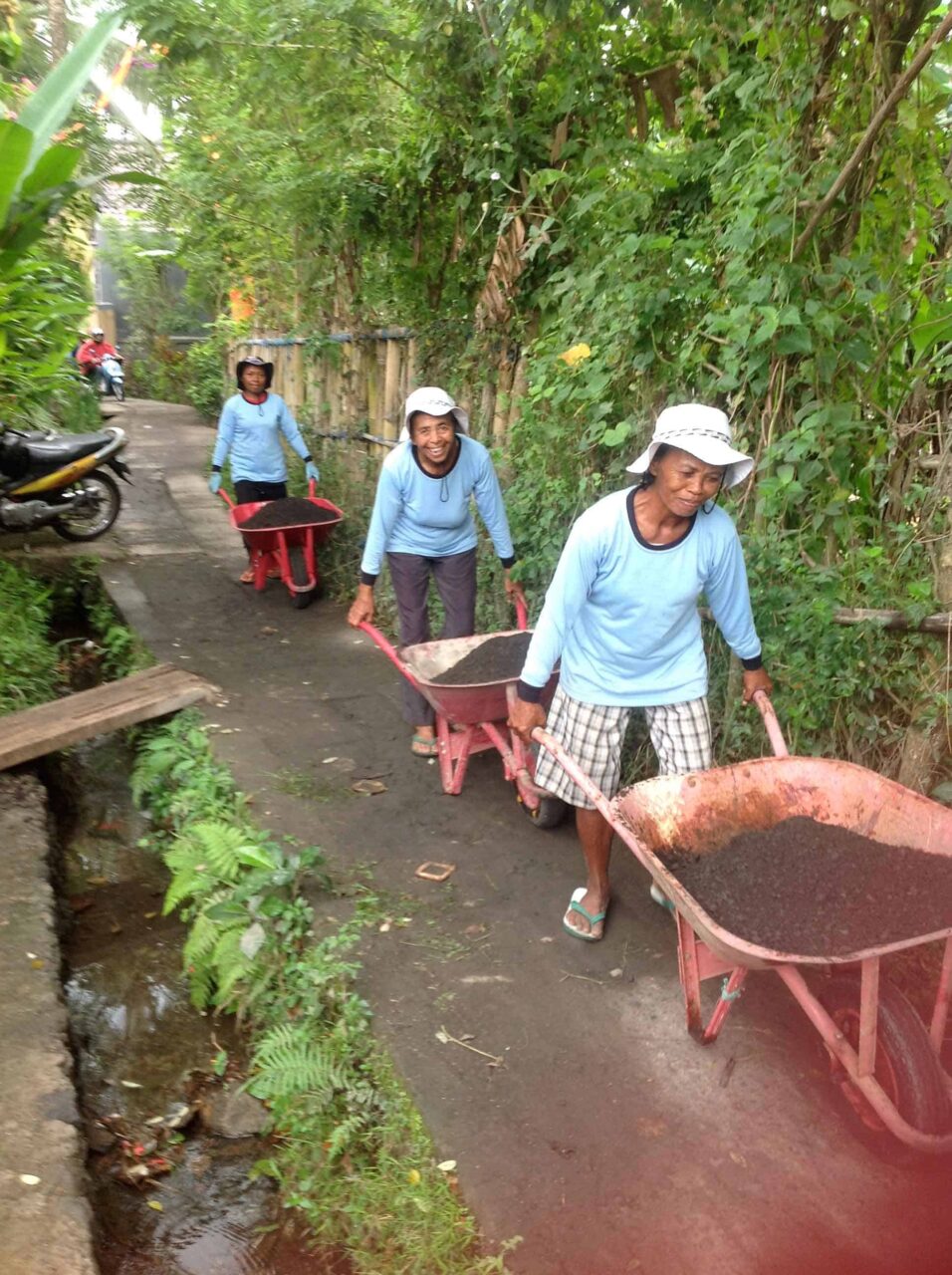