A Scotsman and a forest nymph marry

A Mc and a Mac

When McNamara married MacKinnon, there was bound to be somescotsman around somewhere!!!  And what a lovely use of tartan.  And what a choice of place!  Congratulations Sandra and Jason, married at Gardeners Falls, Maleny.  Unique, different, touching, romantic and down to earth, their DIY wedding was simply perfect.

A Scotsman and a Nymph

When Sandra and Jason first met in Canada they recall talking about travelling Australia and the food they both missed.  Jason proceeded to load up the juke box while Sandra picked most of the songs and introduced him to her love for disco.  Not less than two days later Jason had to leave Canada!!  Mere hours before his flight took off they were enjoying their first “date”.  The conversation flowed easily and touched on so many subjects that they would have forgot to order food, if the waitress hadn’t kept reappearing to ask if they were ready to order. Jason’s friends were worried he was cutting it close for time to catch his flight.  There was really no time for eating!

It was not long before they were together again, in Australia.

Sandra describes Jason as her calm in the storm.  Jason describes Sandra as his down to earth rock.  No wonder it threatened to storm on their wedding day.  But come the right time, they stood on a rock mid stream, with not a drop of rain.

They relish each other’s company, laugh at each other’s jokes and make fun happen every day.  These are qualities that will sustain a relationship.  They are also great qualities for planning an extraordinary wedding.

They turned up to their wedding dressed as Scotsman in family tartan (complete with sporan I may add) and forest nymph.  They wanted something quite unique and intimate for their ceremony, and yet grand in meaning.  Choosing Gardeners Falls, a small out of the way place, with running creek and rainforest all around, they created a wonderland.

Sandra and Jason asked if they could be wed on the water.  We took off our shoes and stepped onto a rock in the stream.  Guests gathered on a larger rock close by.  They chose a hand binding ceremony to seal their vows.  In this way drawing on Celtic traditions from ancient times, bringing the ceremony into modern day with our own twist on the promises and bindings.  Jason had prepared a strip of tartan for the bindings.  For wedding rings they had special rings created, each a combination of an Australian saphire and two Canadian diamonds.

At the conclusion of the service,  Jason draped a MacKinnon tartan sash over his new Mrs MacKinnon, and had photos taken in the middle of the running creek.  He carried her across the water.  Later that weekend they continued the fun by taking their own wedding photos, with just tripod and themselves.

Here is a glimpse of their DIY wedding day: 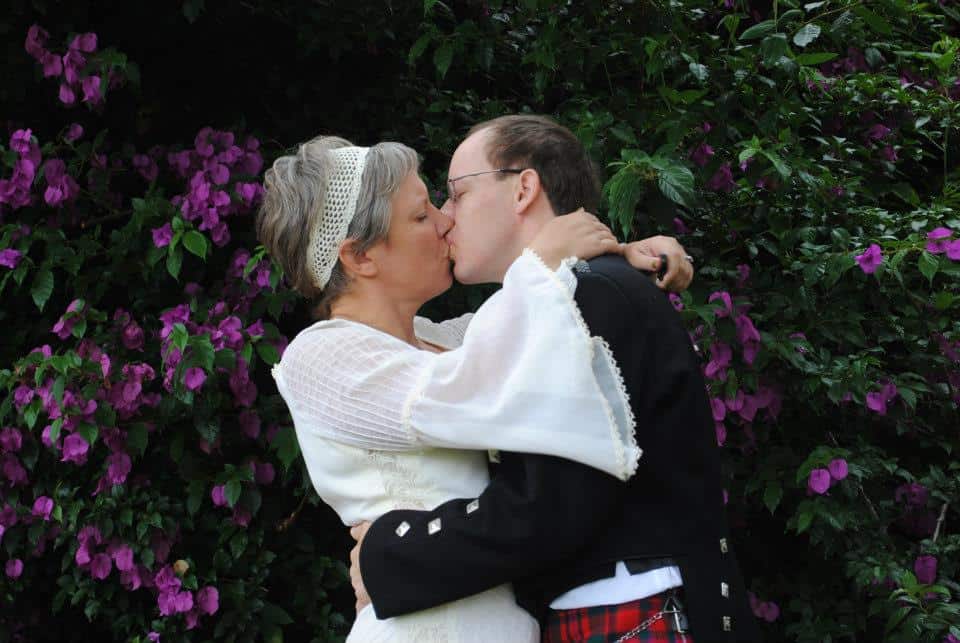 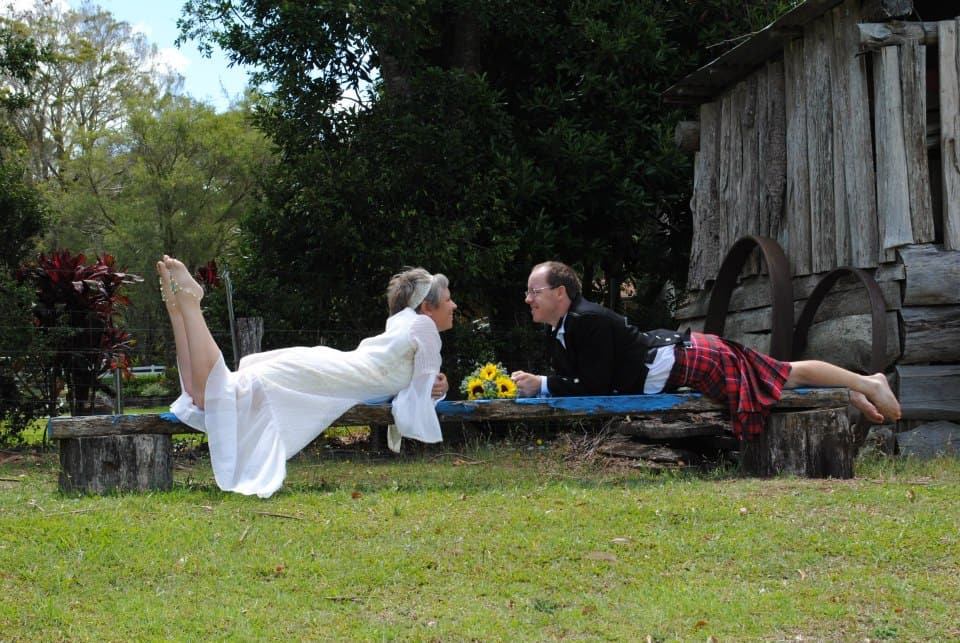 Kari was an amazing celebrant.  She was just what we were looking for, she listened to our suggestions, went with our ideas adding her own input when we knew what we wanted but weren’t sure how to do it.

Kari got a good feel for how we were as a couple and what we liked.  She even offered us choices to choose her dress colour for the ceremony and was even willing to go barefoot.

Kari helped a lot making our ceremony just what we wanted and we had an amazing day.  Sandra and Jason MacKinnon